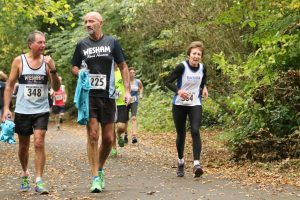 “What do you think George?” “No idea, Nigel. Why don’t we put these t-shirts on?”

There were just 8 Senior men from the Fylde competing in the English Cross Country Relays in Mansfield on Saturday and only 4 teams from 2 clubs west of Blackburn and no senior women, which has made the action quiet for this week. On other fronts, the British & Irish Masters International is set to be staged in Southport next November (this year’s event is next weekend in Swansea), and plans are well ahead to stage the next round of the European Masters Non-Stadia Championships in London, with most of the action set to take place in Regent’s Park.

Carmel Sullivan was the only Wesham runner at the popular Through the Villages race on Sunday morning from the Dressers arms at Wheelton. She finished 10th woman and 1st W50 for the 8.4-mile hilly route out through Brinscall and Abbey Village clocking 1:04:31 coming in 99th place overall. The autumnal conditions were stunning on the northern flanks of the Anglesarke moors despite the rain and clagged-in weather.

Rossendale Harriers dominated the Brownhouse Wham Race at Whitworth on Sunday but could not throw Kath Hoyer off course as she completed the 5km course in 26:51 10th woman and 2nd W55 in 29th place overall. Dave Waywell finished 2nd M70 in 30:27 in 50th place.

Wesham had three runners in the very scenic Derwentwater 10 race on Sunday around the lake south of Keswick. Peter Cruse finished 4th M55 in 1:10:44 over the hilly country course, placing 70th overall. Helen Lawrenson was 26th woman and 5th W45 in 1:19:50, placing 158th overall. Evergreen John Howorth returned to action after some time to finish 356th and 10th M65 in 1:39:57.

The Lancaster Castle Trail Half Marathon took place on Sunday and Paul Gregory finished 9th in an excellent 1:26:25 for 2nd M40 place. Neil Gregson ran a blinder to take 8 minutes off his personal best on an off-road course, coming in 23rd with 1:32:08.