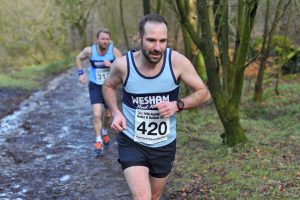 The Mother’s Day 10k in Lancaster was 24 hours early, taking place on Saturday, but it did at least give runners the chance of a race and a celebration in the same weekend. David Taylor was the first Wesham finisher in a very good 7th place with a time of 37:42. Helen Lawrenson was 4th woman and 2nd W45 in 34th place overall with 43:28 just losing out to former team-mate Nicola Unsworth who had an excellent run. Emma Lund finished 10th woman and 55th overall in 47:05. It was fresh and damp but the earlier rain was clearing away, with the course starting alongside the River Lune and then heading out to Morecambe and back.

Graham Cunliffe ran in the Podium 5k “B” race on Sunday morning finishing 3rd M60 and 52nd in a top quality race to clock 25:45, a good time performance.