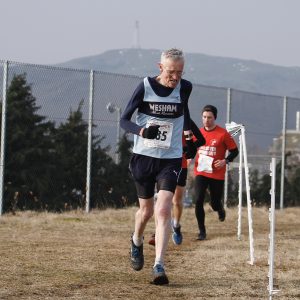 John Collier gives it everything in the Mid Lancs in Ulverston

The Mid Lancs Cross Country League season drew to a close at the new venue at Glaxo in Ulverston under the shadow of the Hoad at the end of a week of extreme weather. There was no snow or ice anywhere in the Lakes Peninsular region and apart from a stiff cold easterly wind it was a bright afternoon with sunshine and a real hint of spring.

Wesham had no ladies running and it was left to four men to compete the senior course of 4 laps and 9.6km, a twisting and undulating course using the banking around the edge of the sports fields and using a coastal landfill site around the remains of a sea dock. Steve Swarbrick made an excellent effort to seal his M40 win for the day and the season, finishing 7th overall in a time of 34:12. Alex Rowe made a return to cross country after a 2-year layoff to finish 102nd with 42:23 coming in 6th M60. John Collier was 106th and 7th M60 in 43:08 with a strong run, and Martin Bates came in 142nd and 11th M60 in 47:13 with the three taking the M60 team win. Provisionally the Wesham women have placed 4th in Division 2; 14th W35 team; 13th W45 team; and 7th W55 team. The Men are 4th in Division 2; 4th M40s Division 2; 9th M50s and no score for the M60s. The annual awards presentation takes place on Friday 20th April at the Blackburn Rovers Premier Suite, a new venue reflecting the increasing numbers attending this event.

Rob Danson competed in the Big Half Marathon in London in Greenwich on Sunday mixing it with the very best runners and he finished 26th with a new personal best time of 1:09:32. The race was famously won by Mo Farah in his new guise as a road runner in 1:01:40 reflecting the cold weather and the extreme conditions of the previous seven days. There were 31 runners that broke the 1hr 10min barrier.

All over the country races were cancelled or postponed with locally the Trafford, Accrington and St Helens 10k races not going ahead.